Lab-grown diamonds have created a buzz in the town, making it one of the trending choices among couples for engagement and wedding purposes. Natural diamonds are expensive and sometimes an average person can’t afford it. But that shouldn’t stop you from getting the best ring for your better half! It is difficult to point out the differences between the two as their physical properties and appearances are the same. However, there are a few things by which you can make out the difference between the two. Both the diamonds have their perks and benefits, but at the end of the day; it depends on the buyer’s opinion as to which one they want to purchase. This guide will elaborate on the intricate details about both of these diamonds to make it easier for you to choose. If you have a strict budget, the best option is to buy lab diamond rings.

What is a lab diamond?

Lab diamond is the same as a natural diamond but the only difference is that the lab diamonds are created in labs and they are not obtained from the nature. As far as physical appearance is concerned, there is no such difference. They have the same clarity, shine, color, and are available in different shapes. Both of them are sturdy and strong. The main element in both of these diamonds is carbon. Despite the physical resemblance, there are certain chemical differences between the two. There is a lack of nitrogen in lab diamonds, whereas you can find some amount of nitrogen in the natural ones. This is one of the remarkable ways by which the gemologist differentiates between the two. There are two distinguishing features between the natural and the lab-grown diamonds- fluorescence and laser inscription.

Moissanite can be considered the best alternative for real diamonds. Moissanite is created by scientists and can be rarely found in nature. Moissanite is harder than Cubic Zirconia, but it is softer than diamonds. There are color variations between CZ, Lab diamonds, and Moissanite- Moissanite has a shinier appearance and sparkles like a firework. It is glossier and shinier than the other two. Anyone who is looking for a budget-friendly option can choose lab diamonds and moissanite. 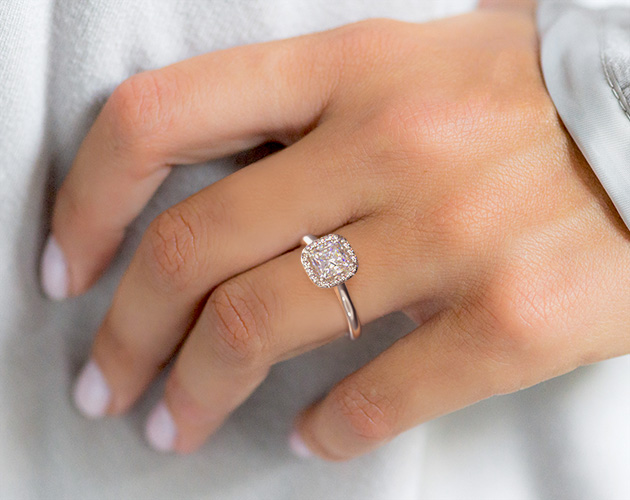 The similarity between CZ and diamond is that both of them are lab-made gems. Also, you cannot find CZ naturally but they are available in multiple color choices. Also, CZ has a greater shimmering appearance than a diamond but the latter has a greater light reflection. As far as strength and sturdiness are concerned, CZ is nowhere near to diamonds. Because of this particular feature, a diamond can withstand daily wear and tear and it can stay intact for at least 50 years. However, CZ is softer and they are prone to scuffs and scratches.

Though the physical and chemical properties are similar between natural and lab diamonds, there are greater disparities in value, price, sustainability, and rarity. We will take up each of them to illustrate the differences.

There are various reasons why couples prefer lab diamonds. Two major reasons include cost-effectiveness and sustainability. As it is hard to differentiate between the two, couples do not find the reason to pay more for a thing that is almost identical in appearance and quality. However, lab-grown diamonds are of better quality than the natural ones.